You can visit the Abbey Gellone, founded in 804, an important historical monument on the road to St Jacques de Compostela, listed as World Heritage by UNESCO in 1998.

On the way to Saint-Guilhem-le-Desert, you can stop at the Devil's Bridge (UNESCO) and be told about the legend of its past. In the cave of Clamouse you will marvel at its beauty scoured by groundwater for millions of years.
In 804, the Comte of Toulouse and the Duke of Aquitaine William (Guilhem in local language Langue-d'Oc) founded an abbey in the heart of the Hérault valley, away from any human presence, a "desert", the valley of Gellone. The abbey is called Abbey of Gellone or, after his death in 812, William's Abbey, and became the Abbey of Saint Guilhem after his canonization in 1066.
The relic of a piece of the Holy Cross drew the devotion of many pilgrims and the abbey became a very important part of the pilgrimage to Compostela.
The village, which has maintained a medieval appearance is invested in Tourism.

The parish church is the old church of the Abbey of Gellone where stand the best preserved french Organ. Most of the original construction matierals disapeared on the trade of old stones consequence of the dismantling of national properties after the Revolution; some masterpieces were exported to the United States and are nowadays exhibited at the Cloisters Museum in New York.

The Museum of the abbey in the monks'refectory, exposes the sculptures'collection of the cloister, the sarcophagus of St. Guilhem and his sisters and a short movie presenting the history of the abbey and reconstruction elements of the cloister from the work of the laboratory MAP CNRS.

The Prison's Tower and the Giant's Castle, defensive fortifications of the town.      Cave of Clamouse, "one of the most beautiful caves in France," has kept its secrets for millennia. It was only in 1945 that a team of caving club from Montpellier discovered this underground world.

The Devil's Bridge, at the entrance of the Gorges de l'Hérault, at a place called "black abyss", the old Roman bridge, clinging to the steep banks, over the river in its narrowest spot. 50 m long and includes two main semicircular arches and two side openings, vents, to facilitate the flow of water during floods.Built between 1028 and 1031 by both abbeys of Aniane and Gellone who controlled jealously both banks of the river. Considered one of the oldest French medieval bridges, he was declared in 1998, a World Heritage Site by UNESCO, on the way to Saint Jacques de Compostela in France.

Today it is a great place to gather with family or friends, and during the summer you can swim at the patrolled beach or browse the Hérault Gorges by canoe.

Argileum, home of pottery (Adult: 5 € Child: 3 € from 10 years).
A unique, lively and interactive experience for all, between tradition and modernity in an authentic workshop from nineteenth century. Saint Jean de Fos, in the heart of the Gorges de l'Hérault, is a pottery village known since the Middle Ages for its glazed terracotta.
At the end of the visit in the Argileum, ceramics work will have no more secrets for you! 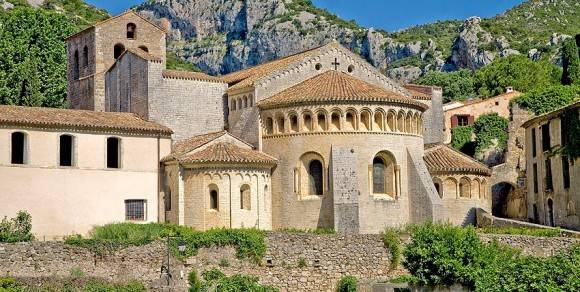